The former West Ham, Derby County, Burnley and Seattle Sounders defender is visiting NCE Soccer for a couple of weeks as our VIP guest.

He will be reunited with former teammate John Curtis and hopes to get involved with NCE Soccer coaching sessions as he considers his own future.

He said: “I’m really looking forward to spending time with NCE Soccer and seeing their elite youngsters in action. 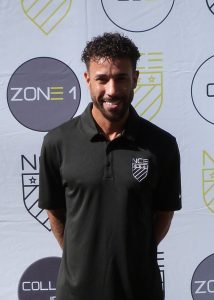 “I’ve heard nothing but good reports about NCE Soccer and the quality of their programming, so this visit gives me an opportunity to see it firsthand.

“I’m at the point in my career where I am considering my next steps and coaching really appeals to me.

“I have a lot to offer and hope that others can benefit from my experience of playing at the highest level.

“I know the US Socer market well, I spent time over here playing with Seattle Sounders winning the MLS Cup in my second season.

“I enjoyed working under Tata Martino at Atlanta United and then had a short experience at Minnesota United, working with Adrian Heath.

“I was hoping that would have led to a longer stay but, out of the blue, I was given a chance to move back to the UK and join West Brom which I couldn’t turn down.

“Now I’ve retired from playing I’m looking at my options and, that includes coaching in the US.

“Let’s see what the future holds but I’m looking forward to teaming up for John and NCE Soccer for a couple of weeks.”

Mears only hung up his boots at the end of last season after ending the 2019 season with West Bromwich Albion.

Since then he has been studying a Master’s Degree in Sports Directorship and is due to finish his UEFA ‘A’Licence, as well as coaching with Manchester City’s Academy.